Yesterday was one long day.  I have been short on sleep and working lots of overtime.  I've been accused of being a "stress junkie" and though I'm working very hard on correcting my bad habit of obsessing over life and foregoing sleep, I'm not always entirely successful.  The Mister's myocardial infarction last month has not eased my stress, nor the Offspring's penchant for beaching it. Believe me, I know the allure of the beach bum lifestyle, I lived it .  Back in the early 80's my life on the beach was one long party.  Remind me to tell you about the dining party at Le Pompano who had obviously had been fishing for "square grouper" and getting the most awesome tip ever in my serving life.  I don't want my Offspring to follow literally in my foot steps. 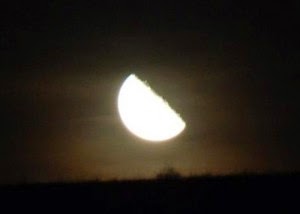 I digress, I was addressing the accidental moon.  After a second eleven hour shift on 4 hours of sleep, I was weary and my eyes were blurry.  My drive last night was a bit magical, the moon was low in the sky, bright and shiny.  It hung low in the eastern sky, half seen and a gorgeous glowing orb, half shadowed but so luminescent, it was mesmerizing.  I was so enchanted with the glow, my 1:00 a.m. drive home was nearly accidental because I kept glancing to my left to get a glimpse.  For someone who preaches no cell phones in the front seat, it was ironic that the beauty of nature was my siren call to be so inattentive.  I nearly drove off the road on the Interstate, near the 22nd Avenue South exit. Fortunately, I corrected the path of mid-life crisis convertible back into the left lane.   The Mister did try to snap a picture of the moon after I got home. The cell phone, however failed to capture the magnificence of this evenings moon.   Bless the Mister, he tries to get up to greet me late into the night, just to say hello and kiss me goodnight.  Most times he scares the bejeezus out of me, who wants to see a shadowy figure lurking in her doorway as you walk to your front door? Our marriage has survived this many years because of our penchant for working odd shifts.  Too much togetherness and our married bliss resembles thunder and lightning.

The accidental moon....well in my life there have been moments when my innate clumsiness and inattentiveness has resulted in another type of moon.  Yeah, you know what I mean.  While napping today, thinking of my boy, missing his laughter, I recalled a few full moon moments that provided him a belly laugh.

Long ago when I was working at Tierra Verde Island Resort (nee Guy Lombardo's Port of Call) as a front desk clerk, I had an unfortunate wrench of my right knee and had to wear a soft cast, thigh to ankle, until the wrenched tendons could heal. These were the days when the Mister worked nights guarding Manuel Noriega's evidence at the courthouse and I cared for Tyler.   He watched Tyler while I worked the day shift at the Resort.  We were two ships that passed in the night back then.  My car was an ancient faded burgundy Chrysler Newport, Old Red.  After my shift, leg aching and throbbing I was more than ready to head home.  I turned Old Red off the Bayway and onto the Interstate heading north to our old bungalow in St. Paul/Euclid.   Somewhere just south of the 26th Avenue south exit, my tire blew.  BAM.  Slide Old Red over to the right.  Now, what? Mind you, these were the day long before cell phones were available for people as poor as we were.  I'm leaning on the car, leg in a cast and looking desperate.  A very kind woman pulled over, looked at my leg and said:  "I'll drive you to a phone, but I don't know if you can get in the car?"  Imagine the scene, I'm in the passenger side of her little Toyota with my right leg in its cast tucked under and hanging out her open car door.  She made the exit and dropped me off at the old Pizza Hut on 34th Street South.  The manager was so rude and he wouldn't let me use the phone, so I hobbled over to the decrepit ramshackle bait shop next door and bless that shop owner.  He got me some ice water and let me use his phone.  I called the Mister, "Hey, honey, the tire blew out...this is where I am."  He loads Tyler and his convertible wheelchair into our beat up van and heads south to find me.  He gets to me and he can't get the tire changed.  Lug nuts were rusted.  He drives back to a phone, calls AAA.  Tyler, in the meantime, is in his chair with me and I'm walking him back and forth in the broiling hot sun. (August 5 pm in Florida is no picnic).  I have my cold water from the bait man and I'm busy sprinkling him with the water and pacing if you can call my walking style with a cast, a pace.  Soon I see the AAA truck and our van heading our way.  Hoorah!  Rescue at last.  I turn Tyler just a little bit to head back to Old Red and I lose my footing in the gravel.  Now we are on a fairly steep embankment on the side of the Interstate and should I mention that my uniform at the Resort was a wrap-around skirt?  Guess who rolled down the hill showing her backside to her son, the AAA driver and her husband?  That would be me. All the way down the hill, until the fencing at the bottom stopped my stop, drop, and roll.  I opened my eyes to come face to face to the trash that people seemed destined to toss out their windows, a cigar butt or two and mulch. 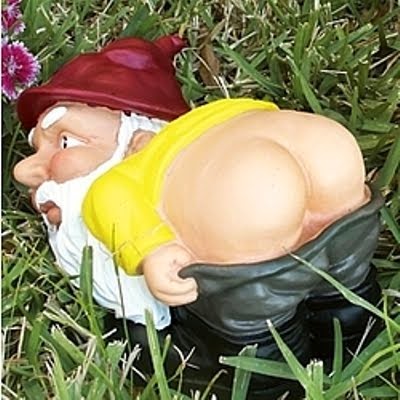 My so-called wrap-around skirt was around my chest.  Tyler was laughing, AAA man was laughing and Mister was laughing.  I was not.  I was the color of Old Red.  A red full moon rising in the East.  I was rescued from the bottom of the hill and we eventually made it home. 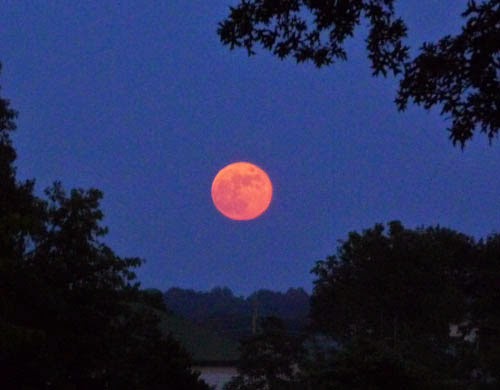 Soon after my roll down the hill, Tierra Verde Island Resort ceased to exist.  We were blessed with a new child (the wee-one) and I became the full-time caregiver of our kids for the next fifteen years.  The Mister started his employ with a mental health facility as an electrician and jack-of-all-trades.  We were nearly normal. Yeah, right.  Sometimes, we are oil and vinegar and not fully mixed.  It is a hard adjustment and our life was a stress grenade in a field of land mines.   Constant illness and surgery after surgery to give Tyler more function is taking it's toll.  We are functioning but not on all cylinders.

After our darling Tyler grew beyond the swingapart wheelchair that you could disassemble and swing into a car and buckle up, he had a full use power chair that he could drive with a head array control.  It weighed close to 200 lbs. by itself and even with the wheelchair carrier bolted to the back of Old Red, transportation became a real issue.  I drove dear Tyler to therapy five days a week, for nearly ten years.  We killed Big Red.  At one point, the Generalissimo (MIL) decided that our mode of transport was too decrepit for her beloved grandson.  The Generalissimo GAVE us a brand new Town and Country Mini-van.  It served us well with just a modicum of alterations.  We removed the small bench seat and created an anchor tie down dead center of the van with an automatic lift that folded into the rear from the side door.  It was all well and good until our boy sprouted and grew so tall in his wheel chair that we could not fit his head in the van through the side door.  Enter Phil of C&H van conversions, this man knows his stuff, he had made the tie down so Tyler wouldn't tilt during turns. This time, he figured out how to raise the roof, so Tyler would be able to keep his head.  I love that man.  He adored Tyler and has for the last 20 years sent us a Thanksgiving card.  I digress again, we are talking about accidental moons.

Early on after the van conversion, I was still in the process of learning how to work the lift.  Really, it wasn't difficult to learn, I was just in another time and space, sometimes, when I was getting Tyler to and from therapy.  I was a head case, then and freely admit it.  Stress can do that to you.

One day, we pulled up for Speech, Occupational Therapy with Clair and Jan on Park Boulevard, Pinellas Park.  I'm ready to unload the Ty-guy and I jam the lift into the floorboard halfway.  It won't go up and it won't go down.  It is flat out stuck.  I call C&H and Phil in his own wheelchair and adapted van drove to my rescue.  That man took time out of his busy day and drove to Park and taught me a lesson in wheelchair lifts.  Thank you Phil.

Oh, full moon rising, again I digress.  Have you ever seen the traffic on Park Boulevard? Hundreds of cars passing in a given minute.  A very busy boulevard of stores and restaurants, plus a main thoroughfare through Pinellas county east to west.  Clair and Jan had their offices on the north side of the boulevard in a very small parking lot.  The only parking spot available to me one day was the one closest to the boulevard.  I get the side door open, reach in to unlock the center lock of the wheelchair harness and lower the lift when I suddenly feel a whoosh of wind and my gauze skirt has flown over my head and is caught in the lift gate over my head to my left.  It is in the mechanism and jammed the movement.  I am now stuck bent over inside a van with my rear facing Park Boulevard.  Our son is laughing so hard that his wheelchair is shaking.  I can not back up, I can't reach up, short of undressing, I was stuck.   Thank goodness that I always heeded my mom's advice to wear your best undies.  The cacophony of car horns is deafening.  Even Phil couldn't save me now.  It took a pair of Jan's scissors to free me. I have now given up any hope of modesty and sheepishly wheel Tyler into therapy.  This too shall pass.

You know the old saw, laughter is the best medicine.  If anything, I've learned to laugh at the moments in my past that shamed me previously.  I've learned to embrace my clumsiness as a symptom of a mind otherwise occupied.  I've learned that sometimes laughter is all you have got.  Miss you my Ty-man, thank you for always appreciating the absurd and pointing out the humor in the bad spots.  Thank you for always reminding me that things could be worse and that resilience and perseverance is a good thing. 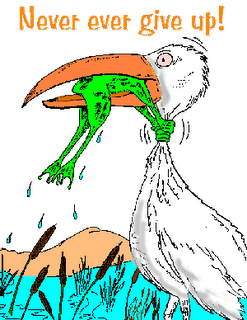 Posted by notyourmomma at 11:14 PM